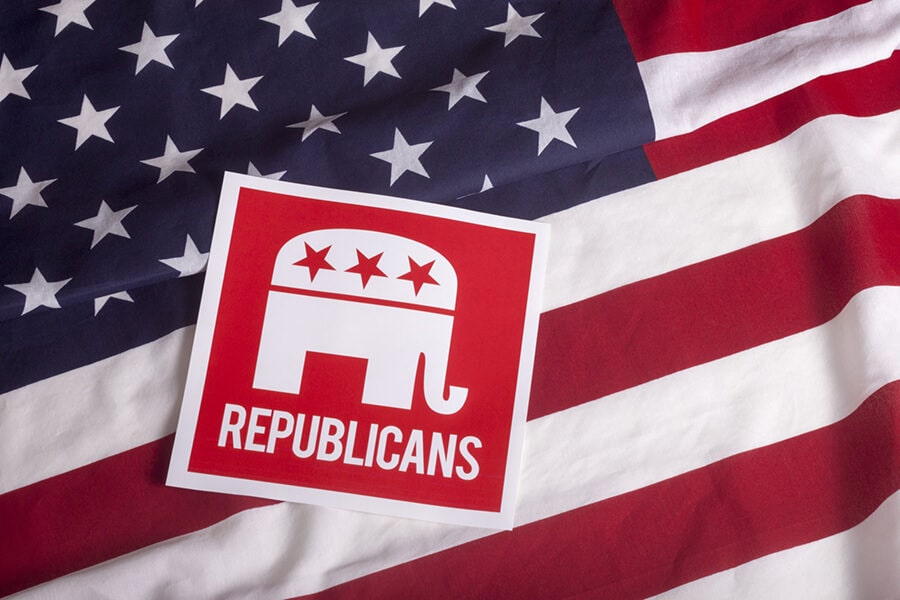 An updated and accurate rankings of the most popular conservative websites online.

Thanks to the freedom of the Internet, never before have right-wing political thinkers had so many choices in finding the best conservative news sites.

The sites are sorted by Alexa Rank, a highly reputable service that measures a site’s popularity and traffic. The lower the Alexa Ranking, the more popular the site. 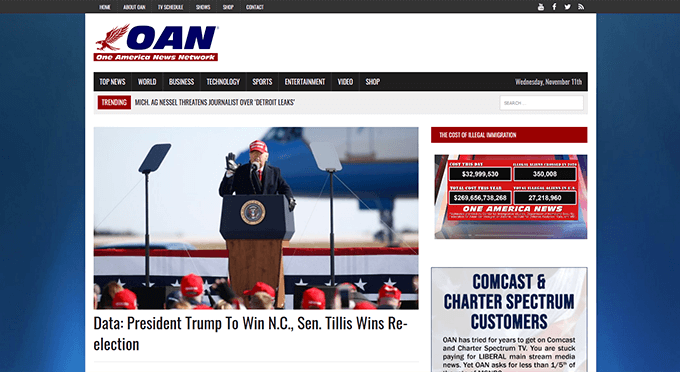 One America News Network has had explosive growth in 2020, and it’s easy to see why. They have a world-class team.

A fantastic site with maybe the best collection of right-wingers in the world today: Will Chamberlain, Jack Posobiec, Charlie Kirk . . . it’s a Conservative Dream Team.

Founded by the late, great Andrew Breitbart in 2007, Breitbart is one of the most controversial right-wing sites in the world. Critics often smear the site as all sorts of -ists (racist, sexist . . . you know the routine by now), but honest people know better. Breitbart saw a meteoric rise leading up to the 2016 Presidential Election and continues to be a dominating force in right-wing news.

Founded in 2009, and independently owned by the Brown family, Western Journal (and its sister Conservative Tribune) has become a powerhouse in conservative circles. The site prides itself on its honest content, grounded in traditional Christian ethics. Works for me.

Started in 2020, Dan Bongino’s website quickly replaced the increasingly hostile Drudge Report as the go-to source for curated right-wing news. Dan’s a great guy, so congratulations on his huge success and becoming a conservative superstar.

The Daily Caller is the work of conservative megastar (and smartest man alive) Tucker Carlson. It’s been around since 2010 and has continued to rise in prominence. The site is ad-heavy, true, but the content is worth it, as evidenced by its tens of millions of monthly visitors.

As you probably guessed from the name, Zero Hedge started as an investment-focused blog, a subject it still deals in. Somewhere along the way, they drifted into political news and commentary, where they’ve found brilliant success. If you’re into investing and have an ideological leaning to the right, Zero Hedge is a must-bookmark website.

Daily Wire has become the cream of the right-wing crop for editorials. Led by Ben Shapiro (and let’s not forget Ben Shapiro’s wife, who is a doctor), the high quality of the site’s content and popularity of its staff has led to it becoming a phenomenon. In under four years, it’s become one of the most-popular, most-respect pro-Republican sites in the world. It’s only a matter of time before Daily Wire reaches the top five.

If you’re a fan of Ben Shapiro and the Daily Wire, check out The Right Side of History: How Reason and Moral Purpose Made The West Great (affiliate link).

It doesn’t get much more controversial than InfoWars, founded and led by the legendary Alex Jones. The site’s content is on the more out there end of the spectrum, sure, but sometimes that’s a good thing. Critics won’t admit it, but a not-insignificant number of InfoWars’ “crazy conspiracies” have proven true. Sadly, social media networks conspired to synchronously ban Jones and InfoWars in the summer of 2018. Despite this, the site continues to rack up millions of monthly visitors.

Founded in 2005, the Washington Examiner started as a daily newspaper. It didn’t take long before they realized print media was going the way of the dinosaur, at which point they focused on online media. The switch worked out brilliantly, as the Examiner has become one of the biggest names in the right-wing blogosphere.

Another site which critics would call “controversial,” The Gateway Pundit churns out a huge number of articles. Founded in 2004 by dapper Jim Hoft (Gateway is a reference to Hoft’s hometown of St. Louis), The Gateway Pundit has become a staple of Republican news sites. Don’t believe the fake news label; it’s a typical smear job.

Wayne Dupree’s an Air Force vet and host of the popular podcast The Wayne Dupree Show. You’ve probably seen him on Fox News, or read his Tweets. This is his website. Check it out.

Glenn Beck’s The Blaze used to be one of the huge right-wing sites, but it’s taken a sizable popularity hit, thanks in part to its anti-Trump position, and now sits outside of the top 10. They recently merged with Mark Levin‘s CRTV, forming Blaze Media, hoping to regain lost glory.

Founded in 2009, I’ve always considered BizPac Review to be like The Gateway Pundit’s quiet little brother. I don’t know why I do that.

The digital branch of the legendary William F. Buckley’s same-named magazine, many conservatives have soured on the National Review for their perceived soft conservatism and anti-Trump hysterics.

Joseph Farah founded WND in 1997. Their coverage extends beyond politics and into finances and religion. Wikipedia and other leftist outlets describe the site as — GASP! — “far-right” and “fringe” — the horror!

Townhall has a vast assortment of Thomas Sowell articles. What more needs to be said?

Tom Fitton’s hard-hitting investigative journalism. Judicial Watch’s coverage of the shadiness of the Russiagate conspiracy is the best in the business. If you want deeper reporting, give Judicial Watch a go.

Founded by Ben Domenech and Sean Davis in 2013, The Federalist has quickly risen to become one of the most popular right-wing sites in the world. They have talented writers who publish great content and are a worthy addition to your daily visits.

Red State’s another conservative site that tried to go the never-Trump route and ended up paying for it. They used to be a big shot, but those days ended once their traffic started plummeting over the past three years.

This is another conservative site with Washington in its name. I’m not sure what they offer to stand out from the pact.

Newsbusters is Brent Bozell’s valiant (and successful) attempt at exposing liberal bias in the media and television. I’ve got to warn you, some of the blatant hypocrisy this site exposes might get you a little agitated.

The website of the godfather of right-wing talk radio, Mr. Rush Limbaugh (I bet you already knew that). The site’s neatly organized, with show archives dating back years.

An impressive collection of right-wing women. Smart ideas, from smart women, with almost no pink hair or whining about the patriarchy or toxic masculinity. Strange, huh?

The third wheel in the trio of major Daily conservative sites (Daily Caller and Daily Wire are the other two), Daily Signal is a distant third, but still puts out quality content on a . . . eerm . . . daily basis.

Steven Crowder is one of the kings of conservative YouTube, and while his website is secondary to his YouTube channel, it’s still popular enough to pull in a couple of million visitors a month.

The Mental Recession is fighting liberalism in all 57 states. It’s a worthy cause.

A hot-shot newcomer to the list. Big League Politics has some popular right-wing journalists working for them, and aren’t afraid to post controversy. Expect them to continue aggressively climbing this list in the months to come.

Bill Kristol’s increasingly outdated Weekly Standard recently ceased publication as a magazine, but their website remains. Will their website have more staying power? (Spoiler: No)

True Pundit is, to my knowledge, a one-man show, which makes its success remarkable. BuzzFeed News tried to smear the site, but BuzzFeed is garbage, so who cares what they think.

Want to know exactly who is funding the open borders movement. Please check out the Message of the Day on https://t.co/rryWmyXe7C–https://t.co/fE9wIh6bm9

The website of former FOX News superstar Bill O’Reilly. Bill always has something interesting worth checking out.

The Rebel is a highly controversial outlet based out of Canada. They’ve had associations with a who’s who of online right-wing stars, like Gavin McInnes, Laura Loomer, Lauren Southern, Tommy Robinson, and Jack Posobiec, among others. Naturally, the comically biased leftist media have smeared them, but they continue on, with no fudges given.

Hey! They have right wing websites north of the border, too!

How bad are things going when publicly supporting murdering babies outside the womb is the second-worst thing you've done this year?

The website of the lightning rod of controversy Milo Yiannopoulos. it’s not for everyone, but they’ve got some interesting takes and a stylishly designed website.

The Great One. A brilliant man who naturally runs one of the top conservative opinion sites on the web.

Former FOX News contributor Kevin Jackson operates the Blacksphere. I say former because the P.C. police got a hold of him last year after he made comments on Brett Kavanaugh’s accusers. Neat fact: Kevin was the first person to kindly and generously reach out to me when I was trying to start Right Smarts, so he’ll always be good in my books. Support him by checking out his website, and following him on Twitter.

Democrats: We don't have enough money to build a wall on the southern border!

Also Democrats: Let's remodel every building in the country, build a railway to Hawaii, and give everyone free education, free housing, and free health care!

Matt Walsh has written for most of the top conservative sites, and this is his home base. He’s one of the most straightforward, logical thinkers around, and liberals hate him for it — which means you’ll love him, just like me.

Mike Cernovich’s website. It covers mindset as much as anything, but most consider Mike on the right, and he’s always been good to me, so he’s getting a spot on the list. His new film Hoaxed is a must-watch, by the way.

Know A Conservative Site Worthy Of Being Added?

We’ve searched high and low to find the top 100 conservative websites (and 31 more just for the heck of it), but if you think we’ve missed one, let us know in the comments section.